Check back regularly to see our newest offerings. 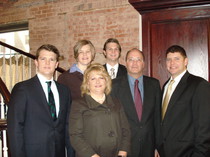 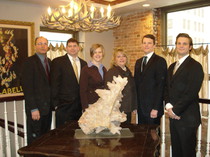 The West Dale Prospect has a porous Hunton Limestone preserved along the crest and west side of the West Dale structural feature. This analogy is identical to Hunton production in the Luther Southwest field, South Harrah field and Shawnee Southwest field. These Hunton producers have two things in common; the Hunton is porous in the top of the Limestone and all analogies lie along a prominent structural feature.  Okland would like to propose drilling a new well offsetting the H.C. Rooker #1 in the SE/4 SE/4 NW/4 of Section 27-T11N-R2E. The proposed T.D. will be approximately 5,700’.

These fields and associated wells follow the cross section and structure maps accordingly.

The Armstrong well has 4-6% porosity with 10 ohms resistivity; the salt water calculation is 90-100%

The Daniel John well has 8% porosity with 40-50 ohms resistivity; the salt water calculation is 34%.

The H.C. Rooker #1 well was drilled in 1957 by Jack Frost and tested the Wilcox. The well produced 1,990 BO and was plugged in 8/85. No tests were conducted in the Hunton formation.

Based off production, log characteristics, and structure of comparable logs and fields, it is Okland’s opinion that the Hunton formation in the West Dale field has been overlooked. Based on our studies, we feel there is ample evidence that warrants a well to be drilled in order to test the Haragan/Chimney hill intervals of the Hunton formation.

The S.E. Payne prospect is located (2) miles southeast of the townsite of Payne and (2) miles north of the Garvin County line. In this part of the Golden Trend the Deese, Hunton and Ordovician Sandstones produce prolifically. In the immediate area where faults are present the Ordovician-Bromide Sands produce on relatively small ariel extents, but high structural relief traps.

The S.E. Payne prospect is a 24-acre Ordovician structure trapped against a normal fault. This structure has at least 40’ of closure on the Bromide surface increasing to 60’ of closure on the Tulip Creek surface. There are two similar features located to the north and south of this prospect. Both features are productive in the Bromide sand where the wells are located on the flanks of structural highs. Okland’s internal volumetric calculations show if multiple Ordovician zones are proven productive oil reserves have a potential recovery of 166,963 BO.

Shadle Branch #1 well (SE/4 NW/4) of section 27-T5N-R3W was drilled by Brookwood Oil Company in November 1967. It had a flowing I.P. of 486 BOPD + 390 MCFPD with a natural completion. The Shadle Branch #1 had approximately 25’ of total pay from the 1st Bromide, 3rd Bromide and the Tulip Creek formations. The well made 166,964 BO + 73 MMCF commingled from all three Ordovician Sandstones.

As a side note, The Golden Trend 3-D survey was completed in 1998. Therefore, by not having 3-D seismic Ladd Petroleum Corp presumably drilled the well from 2-D seismic and missed the top of the structure.

State of Oklahoma #1-27 well shows an Upper Hart net pay of 17’ with 16% porosity and an average SW calculation of 18%. This zone was never tested but has comparable calculations to the productive Beulah Clagg and Sellmon-Brown wells.

The Lexington Prospect lies within the townsite of Lexington, Oklahoma.  This well is to be directionally drilled to the approximate bottom-hole location of E/2-E/2-W/2-NW of section 8, T6N-R1W.  The surface location will be approximately 900’ south which will be drilled to a T.V.D. of 7,700’ into the 2nd Wilcox Sandstone.

The prospect is centered upon a Wilcox “horst” feature that had 1st Wilcox production downdip on this structure.  The 3-D seismic interpretation shows the proposed location could gain 6 mil’s or 30’-36’ of structural advantage to the downdip Baxter #2-8 well.  The two downdip Wilcox wells are approximately 4 mil’s in seismic time separation although there is 26’ of sub-surface structural difference on the 1st Wilcox porosity between them.  The 6 mil’s of up-dip aerial extent is approximately 40 acres in size.  The 3-D seismic interpretation for this fault bound structure is approximately 135 acres in aerial extent on the Wilcox surface.

This 3-D seismic is from the Okland/Cleveland 3-D survey which was surveyed in the mid 90’s.  Okland has drilled several other anomalies on this 3-D and have found them to be productive in the Wilcox Sandstone.

The secondary objectives are the Viola Limestone and the 2nd Wilcox Sandstone.  Both intervals are viable objectives since this well will be drilled into the very top of this “horst” structure.